TWO STEPS BACK Paperback is available!

As the bass player for the best-selling band DarkHeaven, Dean Gawe is accustomed to being a star and living in the limelight.

Maybe his head being in the clouds is the reason he didn’t notice his on-again/off-again girlfriend Kate Denton’s meteoric rise to fame with her band, Kit Kat Kate.

Everyone around knows Kate as the girl who can get things done. She can bypass waiting lists, take a couture dress straight off a model at the end of a runway, and charm the pants off anyone at any time to get what she needs.

For everyone else, that is.

Behind the scenes, Kate was launching her empire.

And no one noticed.

Now that she’s a star, Dean is starting to realize that Kate is THE ONE. But is it too late? Feelings are hurt on both sides, and Kate isn’t exactly his number one fan any longer. 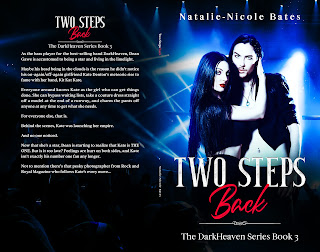 Posted by Natalie-Nicole Bates at 11:02 PM No comments: