2 Days Until Release: AMY BE MINE 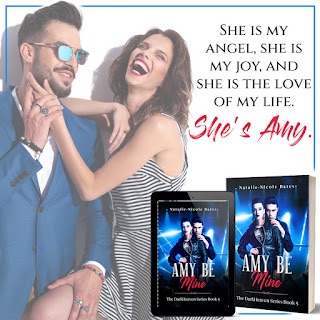 Craig Stenhorn has it all.

He’s the guitarist for the best-selling rock band DarkHeaven. He has money, fame, and a beautiful girlfriend he’s crazy about. When all his inner circle finds love and commitment, it opens Craig’s eyes to making things with Amy permanent.

That is until Fate steps in and threatens his position in DarkHeaven and quite possibly his life. To make matters even worse, Amy is offered a once-in-a-lifetime job as a photojournalist for Rock and Royal Magazine, which is based in London.

With so much uncertainty in his future, Craig considers that it might be best for him and Amy if he encourages her to take the job in London. He reasons that eventually Amy will get so involved in her new life she will forget him.

But can true love really be denied?

Posted by Natalie-Nicole Bates at 4:16 PM