THE LAST HOLDOUT is now available!! 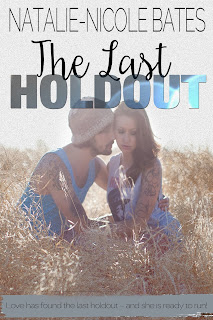 THE LAST HOLDOUT is now available (including the paperback!!)!!
THE LAST HOLDOUT by Natalie-Nicole Bates
Amazon
Amazon UK
Hannah Drury is the last holdout of a pact formed by three friends upon graduation from an exclusive boarding school in Switzerland. The friends pledged they would never marry, instead remain independent, self-sufficient women who relied only on themselves and each other.
Now, years later, Hannah is still searching for the missing pieces of her life. She is professionally successful as a true crime writer, but never satisfied with her success and constantly moves on to new projects. Her latest project is a bookshop with a difference in an up and coming small town in England.
When she meets Justin Salazar, she is immediately attracted to him, but believes he is an aimless handyman. Little does she know, he is far, far from just a handyman.
Can Justin open Hannah’s eyes to the possibility of love, commitment, and most of all, trust? Or will the last holdout once again run away?
Posted by Natalie-Nicole Bates at 8:49 PM No comments: