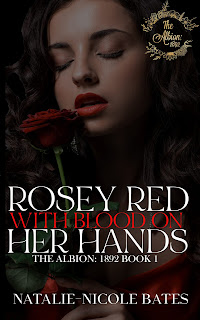 ***COVER REVEAL and PRE-ORDER!***
ROSEY RED WITH BLOOD ON HER HANDS
The ALBION: 1892 (Book: 1)
Natalie-Nicole Bates
Release Date: November 15, 2020
Pre-order price just .99!!
https://books2read.com/roseyred
Paperback link: https://www.amazon.com/dp/B08L3NSQXW
The year is 1892. Rosey Rydall is a fiercely independent and entrepreneurial woman of the time.
Check-in girl at The Albion Hotel is only one of her jobs. In the background, she runs an informal body selling business with the town coroner, Anton Larsen. She also is a trusted friend and confidante of wealthy hotel mogul, Thaddeus Anderton. A friendship that is both loving and beneficial for both.
Two men love Rosey.
She haunts the dreams and existence of Marty Burke, a much married and respected police officer who looks the other way from Rosey’s business, as well as the night time activities occurring in the basement of The Albion.
The other is her partner in crime, Doctor Anton Larsen, a man of true quality who loves the dark and dangerous as much as Rosey.
When Marty’s wife dies, and he turns his attention to Rosey, she spurns his attempts at possessing her. In turn, he threatens everything, and everyone Rosey loves. She must now take bold and decisive action to rid herself of Marty or risk the lives of those who mean the most to her.
Posted by Natalie-Nicole Bates at 10:54 PM No comments: